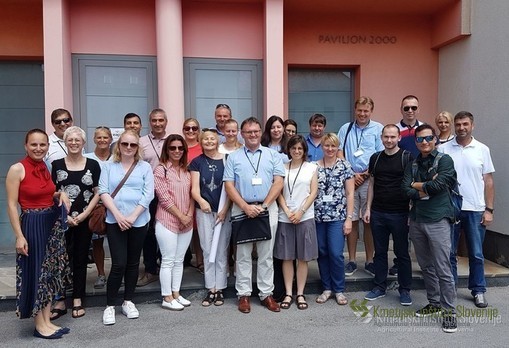 From 1st to 3rd of July 2019 the 4th Agronomy and Physiology Section Meeting of the European Association for Potato Research – EAPR A&P 2019 was held at the Agricultural Institute of Slovenia. The meeting, which is usually organised every three years, was attended by prominent scientists from thirteen different countries from four continents. Their research work is focused on improving potato cultivation technologies and its physiology. The main highlights of the congress were: the use of modern research tools and remote sensing techniques in research on growth and development of potatoes and on drought and other forms of stress in potatoes, physiology of the development of mini tubers using aeroponic cultures and potato irrigation. At the time of the congress, participants were acquainted with the scientific and research work on potatoes at the Agricultural Institute of Slovenia, where they have visited also the laboratories. On the scientific excursion on the second day of the congress potato breeding programme, variety trials at the Agricultural Institute of Slovenia and seed potato production in Slovenia were presented. Participants visited the Štular’s farm with a modern potato storage system in Strahinj and a tourist tour of the medieval town of Radovljica in the afternoon. The last day was marked by a round table about the possibilities for potato production and vine dessication in potato crops in the future in terms of a ban of diquate chemical in European Union since 2020 on, which was attended also by Syngenta's representative.

For the quality implementation of the event we would like to thank all the sponsors: