History of the Institute 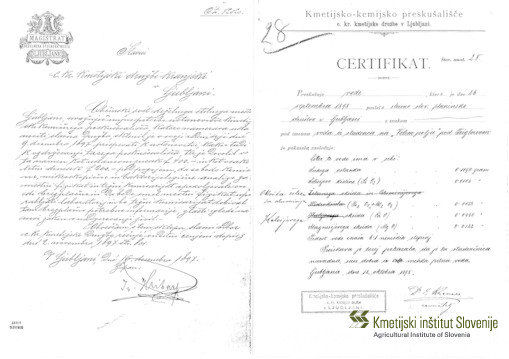 The Agricultural Institute of Slovenia is the oldest institute in Slovenia. Its history began in 1898 when the imperial-royal Carniolan Agricultural Society established the Agricultural and Chemical Test Site for Carniola in Ljubljana. Its charter was issued by the mayor of Ljubljana, Ivan Hribar, and its establishment was also financially supported by the State Committee of the Duchy of Carniola headed by the governor Oto pl. Detela. As the first principal, the founders appointed chemist and agronomist dr. Ernest Kramer from Škofja Loka. For the first five years, all the work was done by the principal and the laboratory worker, but in

1903, an engineer of technical chemistry, Jakob Turk, was appointed the first assistant.

During its first period, the test site performed mainly control analyses. During the first year, they analysed 100 samples, five years later 2500 and in 1909 more than 6000. Among the analysed samples were primarily seeds, foods (flour, sugar, tallow, milk, honey) and drinks (spirit, beer, must but mainly wine). For example for wine, they determined the quantity of alcohol and common and volatile acids; they issued instructions for processing and gave advice on the selection of grapevines. In 1905, they picked and propagated pure wine yeast for the first time and offered them to wine-rowers for regulating fermentation and improving the quality of wine. The reports also indicate analyses of soil samples, mineral fertilisers, sulphur powder, water and determination of plant pests. Before the First World War, the test site was the only research laboratory in the Kranjska region and it performed chemical, physiological, bacteriological and microscopic analyses for the purposes of agriculture, food technology, industry and crafts.

The test site was taken over by the new institution from the Carniola Agricultural Society in 1898, on the estate of Martin Peruzzi in Lipe on the Ljubljana Marshes. Other test sites on the Marshes followed, until 1931 when the testing moved to the Bokalce estate. Production tests (with grains, potato, sugar beet and grass-clover blends) and fertilisation tests at first only served for demonstration purposes. Test plants in variety tests were potato, beans, fodder beet, wheat, barley and soy. Planned selection and breeding work started just before the Second World War but continued with more intensive work after the war, when the Institute bred a series of quality varieties of potato, grasses, clovers, beans, cabbage and other vegetable crops and field crops.

In 1917, the institute only employed three people, in 1930, seven, and in 1940, it had at least ten regular employees. The institute adapted its organisation and operational locations to the expansion of its work tasks and the growth of the number of employees. In 1922, when its headquarters were in the building of the Cooperative Union of Slovenia, it was divided into four departments. In 1938, it moved into its intended facilities on Hacquetova Street, where it is still located today.

In the 1950s, the work was performed in seven departments (institutes) and joint services and remote test fields (Prevoje, Jablje, Moste pri Komendi). The director at the time, Adamič, modernised the work organisation, expanded the areas of work (research, expert work, development-extension work and servicing) and set up the Agricultural Extension Centre as a special organisational unit that later gradually grew into the National Centre of Agricultural Extension. In 1954, the institute received its current name, the Agricultural Institute of Slovenia, and in 1958 it was registered as a research or scientific institution.

After 1959, when the number of employees exceeded 100, the institute obtained the departments for agricultural economics and agricultural engineering and the information centre. It also strengthened its research work and started developing a programme and organisation of the agricultural extension service in Slovenia. It was also one of the initiators that proposed to once again establish the Cooperative Union of Slovenia.

In the 1980s and 1990s, a new laboratory was built, and the research, office and production facilities with a total of 5000 m2 were renovated and analytics and computer equipment was purchased.

In its second century of operation, the Institute is adjusting to the requirements of modern times. It is updating its research equipment, striving to raise the educational level of its employees and expanding the area of its activities. It established the Department for Agricultural Ecology and Natural Resources and with the acquisition of the Centre for Agriculture and Rural Development Jable, it acquired new additional capacities for development and transfer of modern technologies into agricultural practice.

Today, this public research institute, the Agricultural Institute of Slovenia, employs 189 people and is one of the five largest research institutes in Slovenia. It is strengthening its scientific and professional excellence in the fields of agricultural and related sciences by investing in knowledge and research capacities and also cooperating with Slovenian and many other renowned European and global institutions.