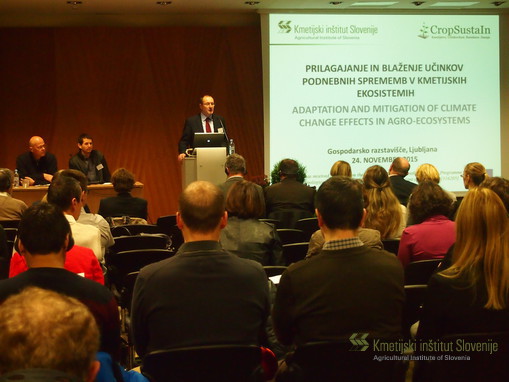 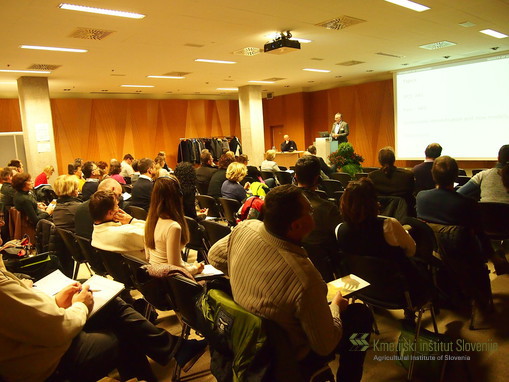 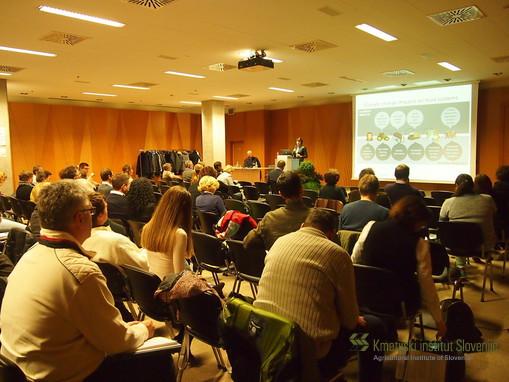 International workshop on climate changes, organized by the Agricultural Institute of Slovenia through the Cropsustain European project, took place in Ljubljana on Tuesday, 24 November 2015.

At the workshop entitled ' Adaptation and mitigation of climate change effects in agro-ecosystems – towards efficient actions for implementation of effective measures' renowned domestic and foreign experts in the fields of agriculture and environment, presented results of the research and scientific findings on the effects of climate change on agriculture now and in the future, the possibilities of adaptation and the measures for their mitigation. Since the event was held a week before the Paris climate conference COP21, the important part of the presentations was devoted to the origin and the state of negotiations on the Slovenian and European Union level.

After the introduction by the Director of the Agricultural Institute of Slovenia Andrej Simončič, representatives of three ministries (Tanja Strniša, State Secretary at the Ministry of Agriculture, Forestry and Food, Tomaž Boh, State Secretary with the Ministry of Education, Science and Sport and Uros Vajgl, Deputy Director of the Directorate for environment, Ministry of the Environment) presented the involvement of different sectors in the problems of climate change and thus confirmed the complexity of this area. More than 90 participants were greeted by his Excellency Pierre-François Mourier, Ambassador of France to Slovenia from the standpoint of the upcoming Paris climate summit.

John Roy Porter from the University of Copenhagen and head of the panel for food security and food production of the Intergovernmental Panel on Climate Change at the United Nations (IPCC) presented food systems and forms of partnership farming for the development of food security, Bernd Wollenweber from the University of Arrhus talked about the findings of environmental impact on the wheat production. The problem of greenhouse gas emissions was outlined by Jože Verbič, and the impact of climate change on plant diseases and pests by Gregor Urek (both from the Agricultural Institute of Slovenia). Lučka Kajfež Bogataj (Biotechnical Faculty, University of Ljubljana) opened the section on adaptation and mitigation of climate change in agriculture and the representative of the European Environment Agency Blaz Kurnik presented the analysis of the effects of climate change. Activities of the Ministry of Agriculture, Forestry and Food were presented by Jernej Drofenik and Hermina Oberstar. The plant breeding activities in Slovenia addressing climate changes were presented by Vladimir Meglič, Agricultural Institute of Slovenia. Panel concluded Manca Magjar with presentation of the EU BeWater project.

As a prelude to tha climate summit, Luka Omladič (Faculty of Philosophy, University of Ljubljana) presented the activities of the Commission for the ethical principles of adaptation, which operates within the framework of UNESCO and Zoran Kus, from the Ministry of Environment and Spatial Planning, introduced the basic positions and expectations of Slovenia.

Those present agreed that the agricultural sector is one of the most vulnerable to the impacts of the climate change. With the right approach the effects could be limited or slowed down, but can’t be stopped. A necessary prerequisite for addressing the climate change properly and timely, is an adequate human and material infrastructure and the implementation of the already adopted strategies, in particular the United Nations Convention on Climate Change, which Slovenia signed more than ten years ago.

The conclusions of the workshop in terms of responses to the current situation and future challenges of climate change in Slovenia:
- Given the fact that Slovenia has no national plan of adaptation strategies to the climate change, it is necessary to create and adopt the document (including negotiating positions between the European Union), in the broadest (inter-ministerial) cooperation and discipline policies;
- Establishment of indicators and their systematic monitoring to find appropriate solutions through concerted action by all stakeholders;
- Increased support for climate change adaptation measures: more intensive targeting of agri-environment-climate payments (KOPOP measure) to reduce greenhouse gas emissions (primarily methane), measures to stimulate infrastructure investments;
- Intensification of measures to reduce the effects of climate change: the realization of irrigation systems, hail nets, anti-frost systems;
- The establishment and organization of competence and demonstration centers that will be used for research, professional work and education of end-users (agricultural advisors, farmers, other producers and general public).