Expert and Research Work of the Nematology Group

Morphological analyses of nematodes are performed with modern light microscopes by analysing species-specific morphometric parameters. Based on measured and visually determined parameters, we determine the species of the nematodes. 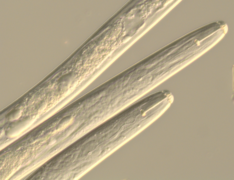 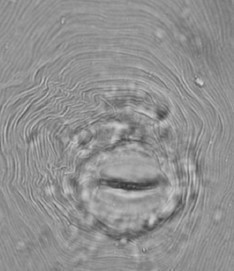 Due to the large number of species and morphological similarity between them, it is recommended to determine the nematode species with an additional independent method. For this purpose, we use biochemical (we analyse isoenzymes and total proteins using electrophoresis) and genetic approaches (most often we analyse ITS region of ribosomal rDNA by various methods such as: PCR, PCR-RFLP, PCR in real-time and by determining nucleotide sequence). 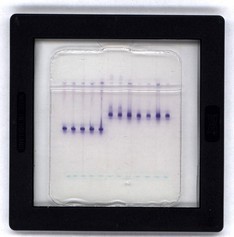 The malate dehydrogenase (MDH) and esterase (EST) isoenzymes are species specific in root-knot nematodes. For identification, we use freshly isolated females from infested plant tissue, isolate the total proteins and separate them using protein electrophoresis. After the electrophoresis, we detect the MDH and EST spots with enzyme reaction and determine their migration coefficients. M. javanica electrophoretic sample is used for reference.

Besides species identification, we advise our clients about the suitable ways of controlling and management of the of detected nematode species.

We are part of special controls of quarantine nematodes.

Pine wood nematode (Bursaphelenchus xylophilus) is classified as an extremely dangerous pest in forestry; it primarily endangers pine wood (genus Pinus) and to a smaller extent other coniferous trees such as larch, fir and spruce trees (Larix, Abies, Picea). Bursaphelenchus xylophilus has not been detected in Slovenia yet. By systematically monitoring the pine wood nematode, we wish to prevent its introduction and spread across the country. The work is performed in accordance with the Rules on the Measures to Prevent the Introduction and Spread of Pinewood Nematode (Official Gazette of the RS, no. 45/09).

Virus-transmitting nematodes on crops cause indirect and direct economic damage. Direct damage is smaller and occurs due to the nematode feeding on the host’s roots, while the indirect damage can be quite large. Nepoviruses are primarily parasites of indigenous plants and cause significant economic damage mainly on fruit trees and grapevines and can even cause the decay of entire fruit trees and vines. To a smaller extent, nepoviruses can spread physically, through direct contact of plants and via seeds and pollen. The most important way of spreading is through their vectors, nematodes from the Xiphinema genus, which are present in the soil, even at greater depths (2 - 3 metres), and are highly polyphagous, which practically prevents their eradication.

In our research of the Xiphinema rivesi species that is present in Vipava Valley, we revealed that it can transmit tobacco ringspot viruses (TRSV) and tomato ringspot viruses (ToRSV). Thus, for the first time, we proved the transmission of quarantine nepoviruses TRSV and ToRSV with nematodes that are present in Europe.

We are also focused on researching the interaction between the Xiphinema index nematodes and the grapevine fanleaf virus (GFLV), which causes increasingly greater damage to the producers of grapevines in the Primorska region.

Control of root-knot nematodes (Meloidogyne spp.) is extremely difficult. They can parasitise numerous plant species; besides many herbaceous species, they also infest a great number of woody plants. Consequently, crop rotation in the sense of their containment is largely ineffective. In Slovenia the available chemical plant protection products (nematocides) are limited and the management of these pests is therefore difficult. With the purpose of developing new effective and environmentally-friendly approaches for controlling the root-knot nematodes, we are focusing our research towards developing of alternative approaches for controlling plant-parasitic nematodes, such as using biofumigation (controlling soil pests by using volatile chemical substances, e.g. glucosinolates, during the decomposition of ploughed above-ground and below-ground parts of selected species of crucifers), the use of various plant extracts and searching for the resistance sources in crops and wild relatives from the Agricultural Institute of Slovenia Gene Bank.

Screenings for sources of resistance in lettuce to Meloidogyne spp.

Article: The effect of some insecticides, natural compounds and tomato cv. Venezia with Mi gene on the nematode Meloidogyne ethiopica (Nematoda) reproduction

One of the key factors affecting the reproduction of root-knot nematodes (RKNs) is the temperature. The model that was developed at the Agricultural Institute of Slovenia enables predictions of time required for RKN species to develop a single generation at a certain temperature or it can determine the number of generations that RKN species may develop in a growth period. The model can be useful in assessing the host status of plants (whether a certain plant species is a good or poor host for nematodes), in the vegetable and field crop production in greenhouses or at open field. Additionally the model enables forecasting by taking into account the effect of climate changes.

The Effect of Plant-Parasitic Nematodes on Plant Physiology

Root-knot nematodes are obligate endoparasites (parasites that cannot survive without a host) that feed on the root tissue of host plants and cause direct damage to plants. In roots, they cause the formation of multinucleate cells that act as their feeding sites. We have studied the correlation between morphological alterations on the roots that are the result of the attack by root-knot nematodes and physiological processes changes in the plant. Morphological alterations on roots and the surface and length of the roots are evaluated by imaging the root system and then analysed with the WinRHIZO software. We analysed the hydraulic conductivity of roots, leaf water potential, net photosynthesis, stomatal conductance, transpiration and the xanthophyll cycle.

Our research of effectors (parasitic factors) of plant-parasitic nematodes encompasses studying their variability in various virulent populations, their evolution and prediction of their three-dimensional (3D) structure. In Globodera nematodes we have focused on effectors from the group of plant cell-wall degrading proteins (pectate lyase, expansins).

Effectors are key elements of pathogenicity and virulence

The effector proteins are secreted by plant parasitic nematodes trough the stylet into the plant tissue to establish the complex host-parasite interaction. They allow nematodes to manipulate host immunity and physiology in their favour by neutralization of plant defence mechanisms, formation of the feeding site, etc. Recognition of effectors in resistant plant varieties triggers strong defence responses preventing nematode development.

Figure: The topology of the phylogenetic tree based on pectate lyase gene (pel2) and protein (PEL2) differs from the accepted species tree topology based on ribosomal DNA (rDNA). G. rostochiensis and G. pallida pel2 and PEL2 sequences are more similar to each other than to G. tabacum. On the other hand, in the accepted phylogenetic tree of the cyst nematodes based on the ITS region of rRNA gene, G. tabacum clusters together with G. rostochiensis and forms a sister clade to G. pallida. As both G. rostochiensis and G. pallida display the same host range but a different one from G. tabacum, which cannot parasitize potato plants, it is tempting to speculate that pel2 gene polymorphism may form the basis of this adaptation.

Prediction of 3D Structure of Effectors

The figure shows front and back view of the 3D structure model of GrEXPB2 type protein with sites variable between type protein and variant clones marked with colours. While type protein has been shown as an active protein, tested variant proteins showed no activity. All three amino acids that are altered in the variant proteins are positioned on the outer surface of the protein, which suggests that these differences could affect interactions with other proteins, potentially including pattern-recognition receptors (PRRs).